Marmot on the menu

After just four weeks of travelling, Loo and I were already running out of chat so when Jeanette asked if we were happy to eat as a family we jumped at the chance. The food at the ranch was exceptional. Jeanette, having previously worked in the Norwegian restaurant trade, was a fantastic chef and cooked a range of traditional Mongolian fare. She also wasn’t shy on making enough to feed a small army. For breakfast, we feasted on homemade, deep-fried bread, milk curds, yoghurt, porridge or American-style pancakes. Lunch was traditional goat dumplings and delicious salads with more fried bread and dinner… we’ll come to that. 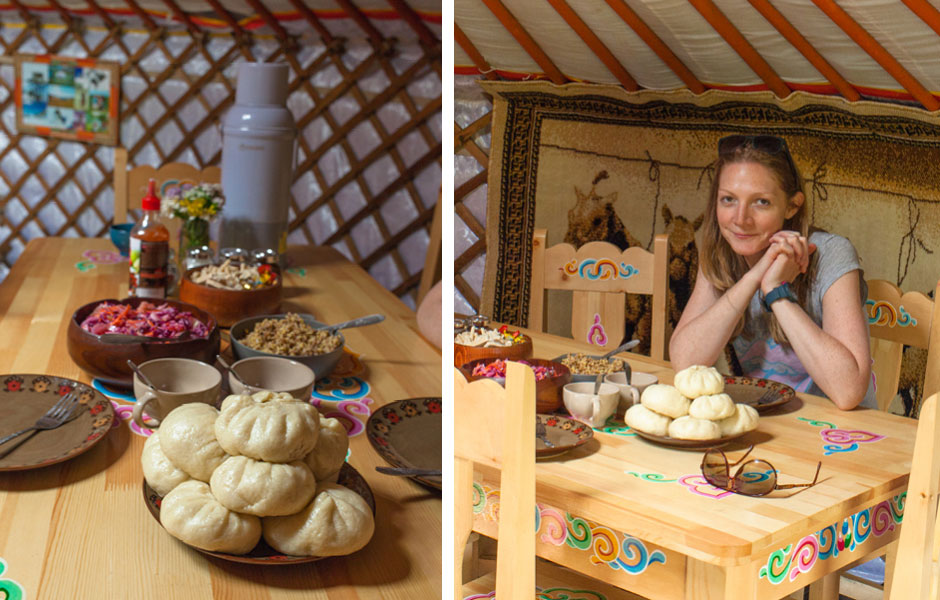 Mongolians love horses. They ride them, they milk them and when one is on its last legs they turn it into a wide variety of tasty goodies. It was after a particularly long trek we returned to camp exclaiming we were so hungry we could eat a horse. The wheels were set in motion and that night we settled down to a beautifully presented spread of horse ribs and coleslaw. Unsure of the etiquette around the subject I enquired, rib in mouth, whether they had known our dinner in its past life. The answer was no, as unlike a lot of Mongolians, they never get high on their own supply.

Before embarking on our trip we had zero intention of eating a real marmot but after hearing from Pujee pretty much anytime we were on horseback about how incredibly tasty were, we made initial enquiries as to whether it might be possible to have a boodock dinner. This went along the lines of: “If we see one, can’t you just throw a rock at it?” An apparently tried and tested technique for nabbing marmots.

At first, our pleas fell on deaf ears for a variety of reasons: out of season, not fat enough and, as Pujee pointed out, they were endangered and hunting them is only allowed via permit. We later heard from Jeanette that they owned a marmot hunting permit so, over the next two days, I did my best to ply Pujee with questions about Mongolia’s favourite furry snack.

On our final day at camp, Pujee caved. Jeanette was ordered to hold off on dinner plans and Pujee hopped on his motorbike across the valley to fetch his neighbour’s gun. In my mind, this was some kind of WW2 vintage shotgun. In reality, he returned with a semi-automatic sniper rifle that looked like it would be right at home on the modern battlefield. 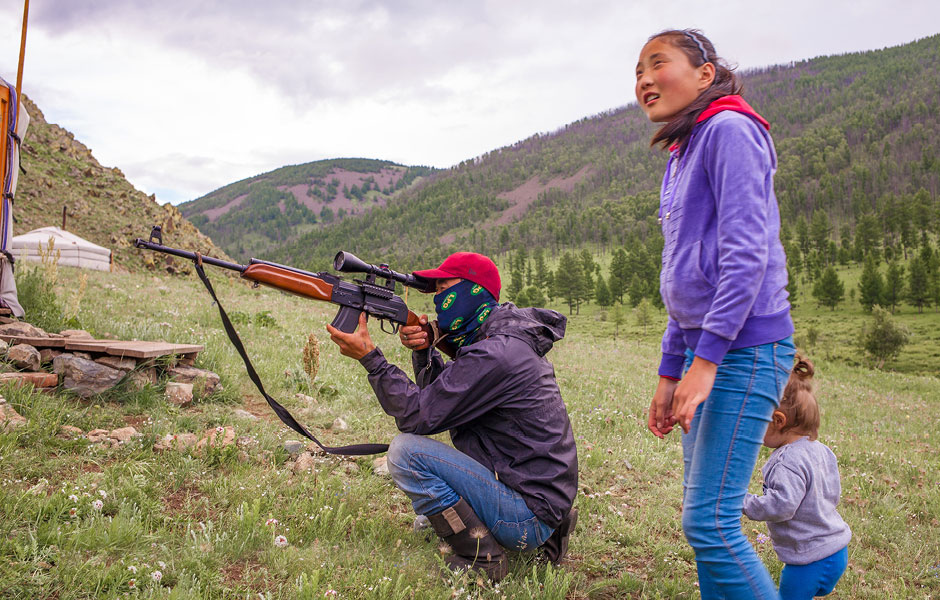 That afternoon we headed off on the horses with Jeanette, nervously awaiting news from the frontlines. After no news for over two hours, we agreed marmot was probably off the menu but then finally after a quick water stop Jeanette realised she’d received six missed calls in the last 40 minutes. Having done her best to stop Pujee tucking in without us, we galloped back to camp to meet our dinner. 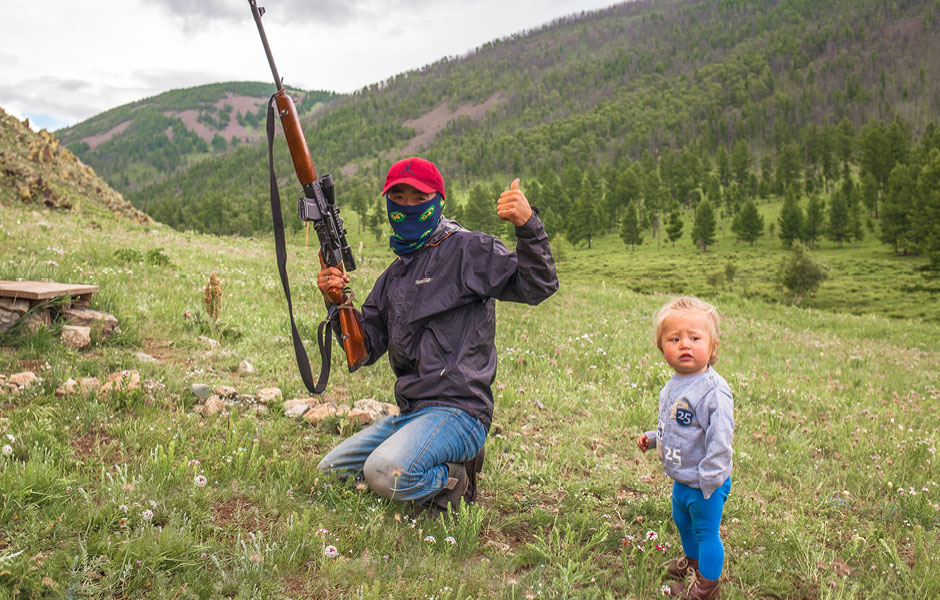 What we met was a plastic bag full of quite cute, buck toothed, furry rodent with a bullet hole in its head. It was a clean kill – one shot right between the eyes. Preparation began immediately, as it turned out this was 80% of cooking a marmot. 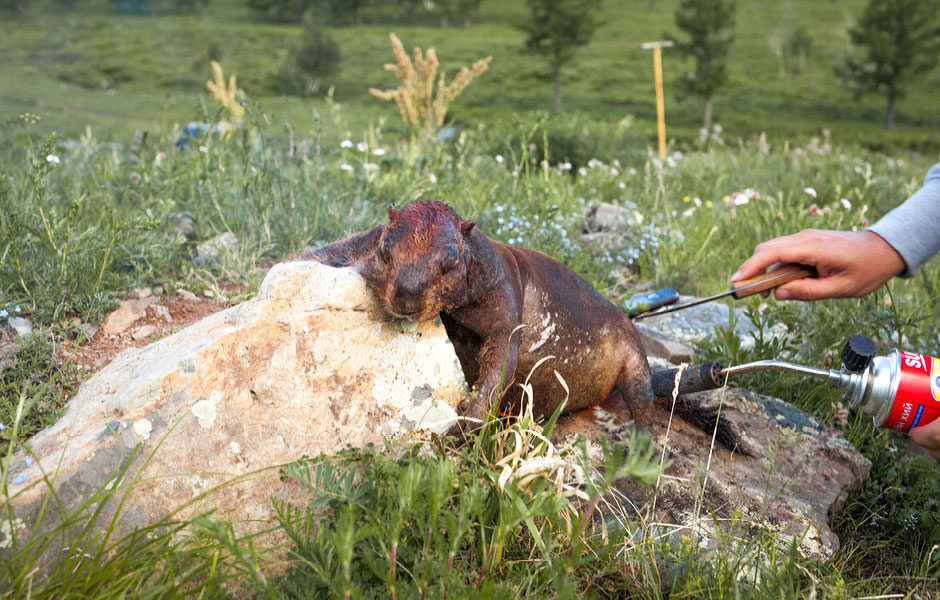 First, the fur was dealt with…by blow torch. Clearly not the traditional way of doing things but it was effective and what was left was akin to a raisin after starting life as a grape. Unsure how this tiny, shrivelled, blackened morsel would feed all five of us, we persevered, gutting and butchering it on a rock in the middle of camp. Job done. 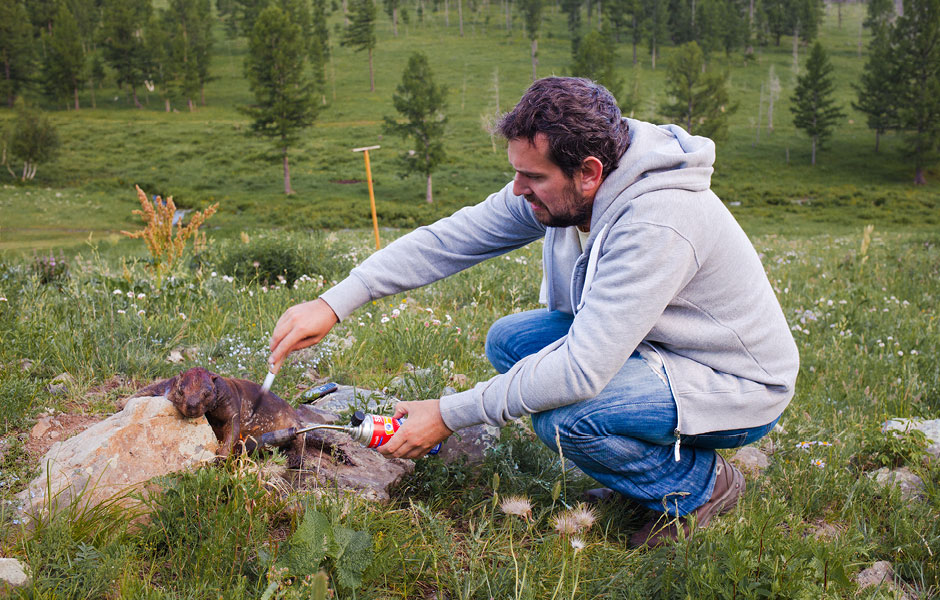 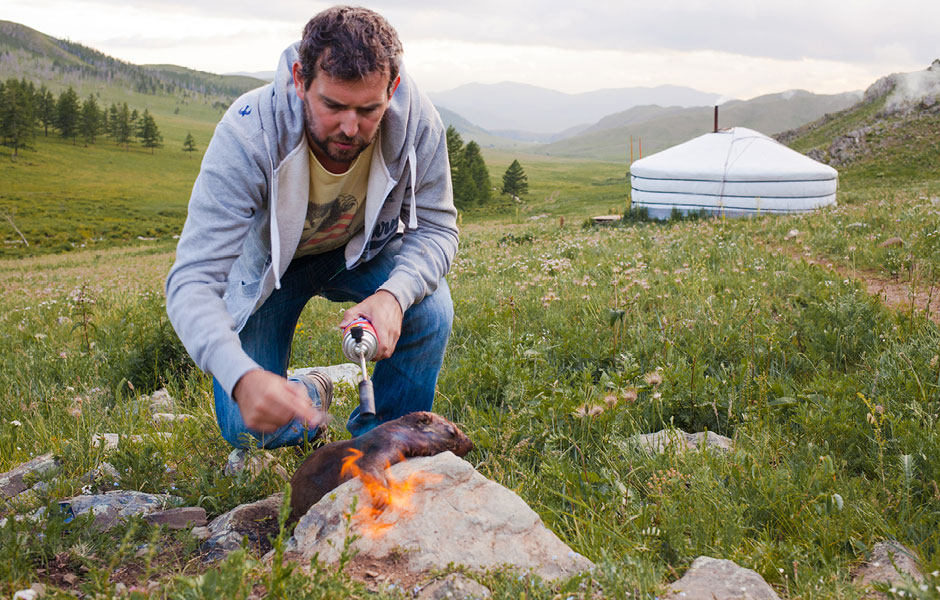 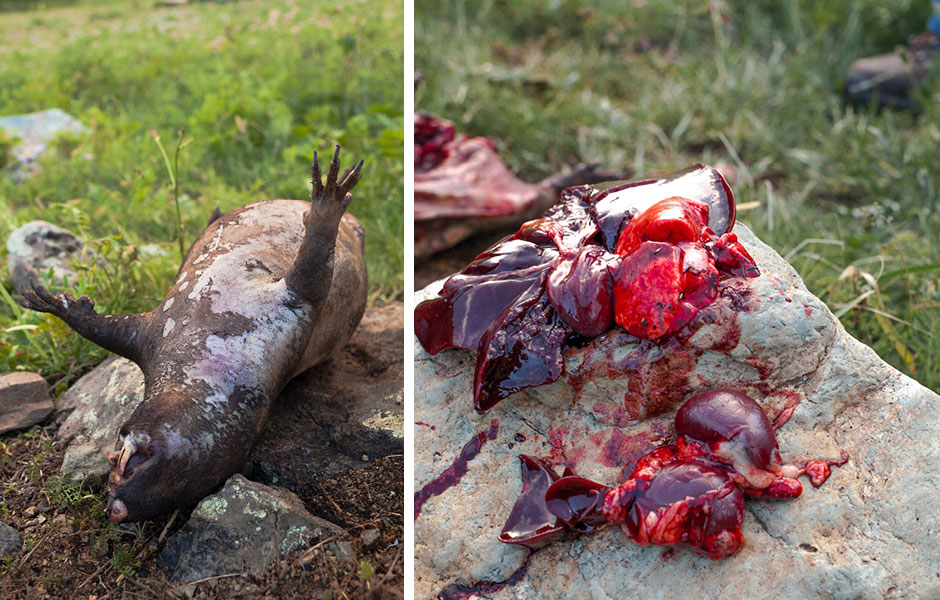 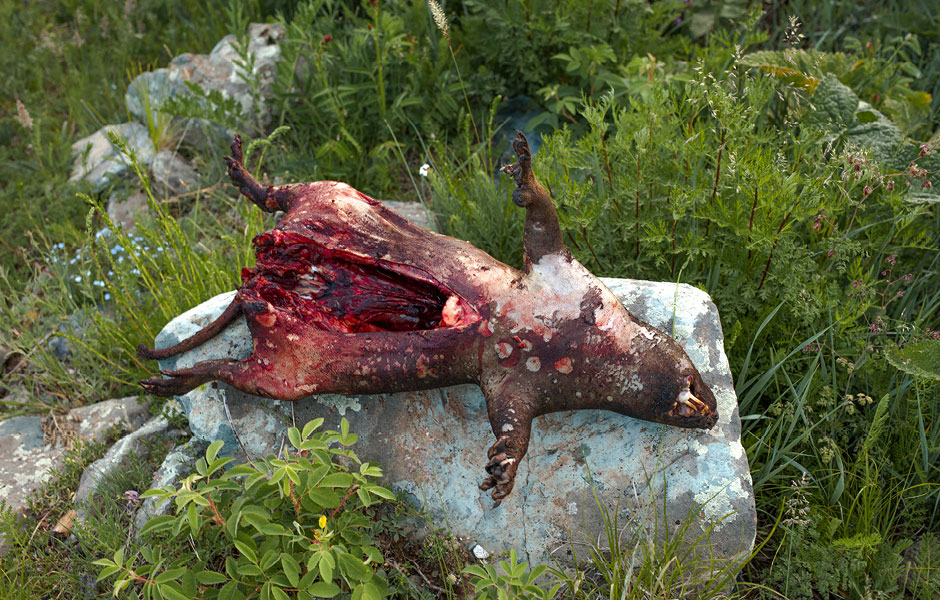 There are a few ways to cook the humble marmot, most involving the use of red hot river stones. As it was still early season, ours didn’t have a thick enough skin to enjoy this particular fate, so it was spared having red hot stones stuffed up its arse (Boodog) and instead placed in a pot of stock with the red hot stones laid upon it in a kind of marmot stew (Khorkhog). By this time, it was pitch black outside so we settled down to dinner by candle light and had our first taste of rodent. 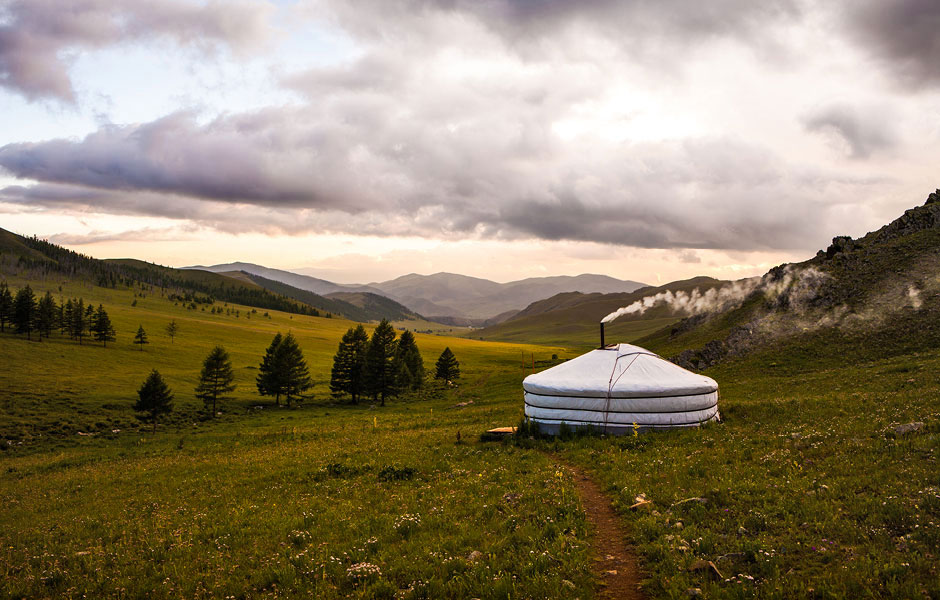 It was rich, gamey, dark meat, somewhere between duck and pheasant. Surprisingly tasty, if a little fatty – we were told this one was actually quite lean, though it was still covered in a inch layer thick of fat, which this is the tastiest, part of course. I had seconds, nibbling my way through the smallest rack of ribs I’d ever seen and there was still leftovers – amazing considering the size of the animal.

For our last night at the ranch it was wonderful. Saddle-sore, hobbling, stuffed and very fulfilled, it drew to a close what we both agreed had been one of the most amazing experiences of our lives. This really is saying something when you consider we’ve seen such sights as the Frite Museum in Bruges complete with replica chip van and the famous Cambridge City Bridge Tour.

The next morning, we said our reluctant goodbyes and were led over the mountains to Degee who was waiting to take us back to the hustle and bustle of UB. There, we spent our final night in Mongolia before boarding the overnight train to Beijing. We were finally crossing the border into China.

He who drinks, dies; he who does not drink, dies as well. 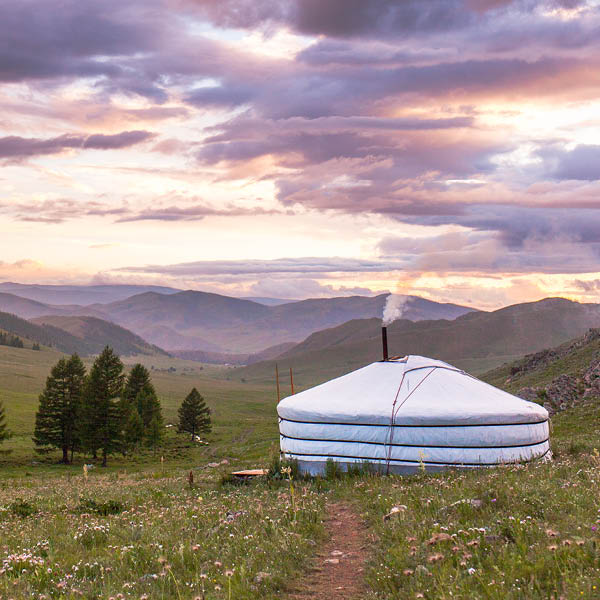 Our Ger Camp in the wilderness

Our four days in Mongolia were spent with the wonderful Pujee (Mongolian) and Jeanette (Norwegian?!), who lease out… 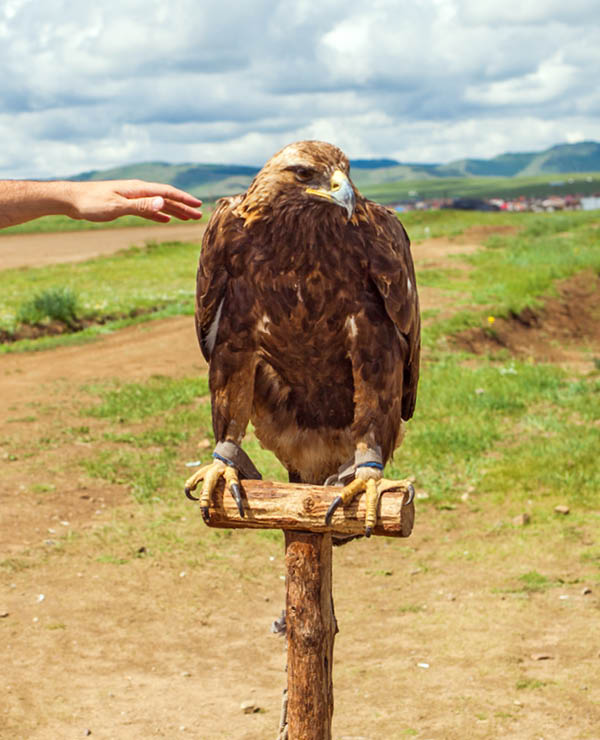 We fell in love with Mongolia almost immediately. This was a land where you could glance up while…